The posts here about Tila speaking about the Illuminati are usually about how she steals her stories from sites like The Vigilant Citizen or Info Wars. This one is a bit different because Tila's fans, especially those concerned with conspiracy theories, need to learn the facts.

Let's start with what Tila posted on Facebook today... 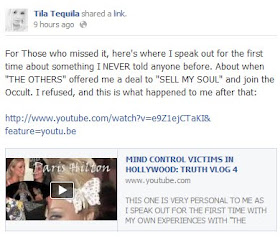 Tila talks about how "The Others" came to her and offered her a deal to sell her soul, but being the strong "Boss Bitch" that she is, she refused.

Here is the truth and it comes from Tila's own website, MissTilaOMG.com. 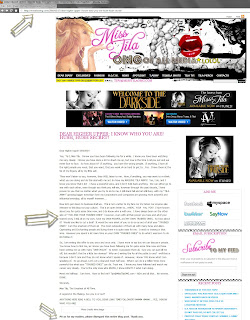 You will have to click the image to view the details, or you can view the website for yourself. Tila may think since the website is no longer active, her secret is safe. Nothing is ever gone from the internet. View the original site here.

Now, let's discuss exactly what Tila writes about on this site. First, Tila starts off by addressing Higher Upper, saying that this person has been following her for quite some time. Tila goes on to say that she has all the right people. This is where it gets good, Tila Army, because she's talking about you. Tila says that you won't listen to The Others, but you will listen to her. What does she call you, Tila Army? She calls you her TRAINED ONES. You know, the same people she references on her Facebook page today ... followers, sheep, ignorant morons. She is calling you weak and offering you up to these Others. You, Tila Army, have unwillingly become Tila's sacrificial lambs.

Now for the sad part ... Lady Gaga "The Others" didn't read Tila's blog and never contacted her. Fast forward to today, Tila, still desperate for attention and hoping to regain that little bit of fame she once had, is saying that it was her that that refused the deal.

This person you all consider to be a strong leader wanted nothing more than to be one of them, one of the one she spends day and night trying to warn her fans about. She wanted to offer her Tila Army to "The Others" without their knowledge. She didn't think she needed their consent, because she said they would do whatever she wanted. She thought they were weak-minded, without a backbone, and would follow her no matter how low she had to sink. She hoped they would do all her dirty work.

Over the weekend, Tila also made her views on genocide and eugenics clear. 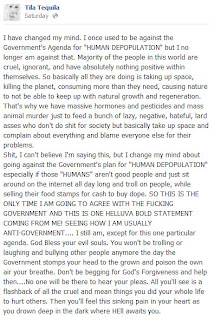 Tila supports the government sanctioned killing of people she calls ignorant. This was something supported by Hitler and others within the Nazi party. On top of killing off Jews, Gypsies, and homosexuals, the Nazis killed off mentally handicapped people. As Tila admits to both drug addiction and bisexuality, she is also someone that would have been executed. As we saw with her Celebrity Gossip Blog, Tila is someone who sat on the internet and spent her time bullying celebrities, making up stories that had to be taken down because they were untrue. Tila lied about being abused by an NFL football player and faked a suicide attempt. Tila is the exact type of person she thinks should be put into a gas chamber. As are her fans, as she has taken to calling them ignorant lately.

Thien Thanh Thi Nguyen (aka Tila Tequila) has officially come out in support of government sanctioned killing of innocent people. 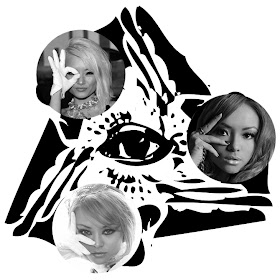